While 2016 has been a very turbulent year outside of soccer with nearly every celebrity dying and Donald Trump pulling off the the most shocking political upset in the history of ever by getting elected President, (we literally still can’t believe we are typing this), there have been some great moments on the field for your fighting Purple Lions. With the year closing out, we’d like to draw attention to them with the aim to raise your spirit and be optimistic for what the new year holds. With that, here our Top 5 Athletic moments for Orlando City in 2016:

5. Kevin Molino opens his MLS account
After missing more than half of the inaugural season due to an ACL tear, the team had high hopes for Kevin going into the new campaign. A Lions legend who has been with the club since the beginning, fans were desperate to see him shine on the biggest stage in American soccer. Molino started the year off displaying his fantastic vision and passing abilities but it wasn’t until the Portland game that he finally nabbed his first goal. In the 74th minute, he drew a penalty after being tripped in the box. Primary penalty taker Kaka instead handed the ball to number 18 and the culmination of years of hard work was realized as he slotted the ball to the left corner amidst the delirious roar of the Supporters Section.

4. Down goes Portland
Orlando City continued their win streak against the reigning MLS Cup Champions Portland Timbers as they visited Orlando for the first time. In a total demolition, Orlando City ran roughshod over Portland as 4 Lions scored goals including, as previously mentioned, Kevin Molino who laid claim to the first goal of his career in MLS. Not only were the Lions spectacular on offense but even goalkeeper Joe Bendik joined in the festivities as he saved a penalty. There wouldn’t be too many more happy moments the rest of the season but this game was a complete joy to watch.

3. Air Molino at Manchester City’s Farm Team
This year was memorable for many late game heroics by the Men in Purple and one of the most spectacular came as Orlando City visited their nemesis NYCFC in Yankee Stadium for the second time in 3 months. Once again, the Lions found themselves down 2 goals only to come back at the very last moment to salvage a point in the standings. This time it was courtesy of a sensational header by Kevin Molino off a Cyle Larin headed-cross with 10 seconds of stoppage time remaining. Who can forget the sight of a Lions’ traveling supporter in tears at the incredible finish? The Orlando City Twittersphere had an absolute field day at the expense of NYCFC fans that evening.

2. Sending off Camping World Stadium with a total Mic Drop
With a scarcely believable 79% unbeaten percentage at home over the combined total of seasons that Orlando City have roamed the field at the former Citrus Bowl, the Lions owed it to the supporters to send the venue off in style as the club played their last match in their original den. The fans were not disappointed as playoff-bound DC United fielded a watered-down lineup and a full powered Lions roster beat the living daylights out of them. Kaka put on a total clinic with flashy passing, a goal and two assists while four Lions scored in a 4-1 route as the final whistle blew and the curtain dropped on a legendary run at the newly christened Camping World Stadium.

1. Two Goals in 64 seconds
Nothing can top what amounts to the outright grand thievery committed by the Lions against Real Salt Lake in the 2016 opener. After a frustrating 92 minutes which saw RSL take a 2-0 lead in a match with 10 players a side, the unthinkable happened. Break Shea sends a perfect ball into Cyle Larin who one times it to the back of the net and the crowd explodes at the improbable goal. Then 63 seconds later Servando Carrasco sends a long ball nearly the length of the field that lands just in front of Larin and Adrian Winter who are fighting off defenders to get to it. Larin gets taken out with 2 defenders and Winter fires it to the back of the center of the goal sending the 60,000+ crowd into delirium while running off the field looking like he just won the Powerball, woman of his dreams and an unlimited supply of Awesome Sauce. We’ve never before seen anything like it and doubt we ever will again.

Orlando City SC faces their last hurrah of the 2016 preseason today against history-steeped Brazilian side Esporte Clube Bahia. Obviously, probably a total of about 1.3 percent of you had heard of this team before you saw them tucked away in your 2016 Season Ticket package. Not to worry, our crack staff here at TCBG are at your service with FIVE HOT TIPS about this Série B squad originating from the country of the Beautiful Game. 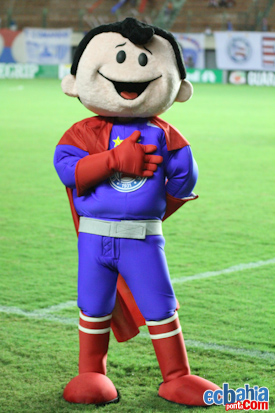